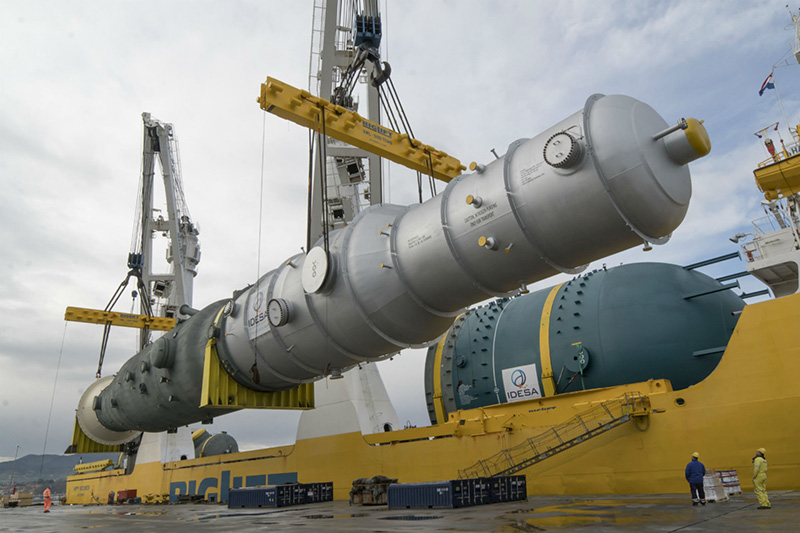 Companies that manufacture pressure vessels always run into the same set of problems regarding the automation of welded joints. In the automobile industry, we find welded joints in thin sheets of less than 3 mm where joints are welded with only one weld seam. In contrast, hydrocrackers, coke drums and vessels for holding liquified gases, among others, are complex systems that are not very repetitive, but are very heavy and voluminous, which complicates automation of their welded joints.

In some cases this equipment can have lengths of 100 meters, diameters of 15mm and can weigh more than 1400 tons.  They usually have a thick steel wall (whose range varies greatly, but it is usually between 20 and 350 mm), and they may be formed of forged ferrules or sheets that are curved and welded together lengthwise. The connections of this equipment with the different subsystems present in a refinery or an industrial plant are very variable, which means that each item of equipment has a unique design. Hence there are barriers to being able to improve the current production process, which is based on boilers and manual welding.

The present project, in collaboration with TUINSA NORTE and TREELOGIC, conducts an analysis of new welding technologies to carry out the joints of pressure equipment, and the production system, focusing on multi-pass welding in high thickness, will be robotized and automated.

Founded in 1993, IDESA has become consolidated as one of the most important companies in design and manufacture of capital goods at the global level.

IDESA’s success is based on its firm commitment to safety, quality and competitiveness of its products. This commitment is shared by each and every one of the organization’s employees, with the objective of maintaining our clients’ trust. IDESA’s reputation and good name are attested to by its activity on five continents.

Due to its evolution, IDESA is one of the leading suppliers in the manufacture of large-scale equipment such as coke drums, vacuum columns, crackers, reactors, etc. Its position on this market is due not only to the human and technical resources that IDESA employs, but also to the location of its main manufacturing center itself, situated in Avilés (on Spain’s north coast), less than 1 km from the loading point of the industrial port, which means that the equipment can access the port directly without transportation limitations.

Starting from May 2014, Idesa has formed part of the GRUPO DANIEL ALONSO (GDA).